3 years on, almost to the day, since the ISLAND SELECT athletics team was formed, the weekend of Sunday 20th April 2019 saw a brand new crop of SRAC youngsters raring to go!

A bit nervous, but really excited too! Much as the coaches and athletes all were in 2016 for the very first match when they turned up in Dundee in their minibus, with both athletes and coaches nervous as anything as the big guns rolled in in their big buses, and they looked on in awe!

But what a year that first year was, with their team-mates from the North Uist, South Uist & Eriskay, & Orkney and Shetland Athletics clubs more than holding their own. The U17s won Match 1, and the U13s & U15s took an excellent 2nd! What a debut, and that was the theme set for 2016, with both teams continuing with the high quality performances in matches 2 and 3, and qualifying for the National Scottish final!

On to 2017, and with both teams again in the national final, the U17s went on to win, lifting the U17 Scottish YDL Challenge Trophy; and 2018 saw the U13s & U15s finish a fantastic runner up to the mighty Edinburgh AC, with the teams again amongst the country’s top 8 YDL teams!

It has been without doubt a fantastic and rewarding experience for the club, and so important for SRAC’s best young athletes to get more high level competition. What lies ahead then for 2019?

Well we got a great indication from the first match of 3, with 6 of the 7 SRAC youngsters – 4 making their debut – smashing their PBs, as they once again teamed up with our friends from a wee bit further South in the Western Isles, and our friends from the North !

As race day dawned, the conditions in Aberdeen were promising, with little wind, but a sea haar making it a bit chilly at the start. However it soon lifted, and the sun was shining with great conditions.

Another good run followed from U17, Matthew MacLeod as he finished 4th over the 100m in the B race, the first of 2 races for Matthew.

It was a busy day for the SRAC athletes, and while we had no-one in action in the field, there was plenty happening on the track!

U15 Lewis MacLean came home 2nd in his 300m, with a good strong run which was very  close to his PB.

U15 Francesca Greenstock, on her Island Select debut, had a really good gutsy run over 1500m, finishing in 6th place in the girl’s A race. A great effort, which was rewarded with another PB for Francesca, after her run at the Stornoway April OGM. Her new mark is 5 minutes 49.23 taking another 3 seconds off her best time.

The 4 x 100m relays rounded of the day, and saw all of the SRAC athletes in action with their new friends and island team-mates, the end of what was a great day of performances from the ISLAND SELECT squad !

The even better news, which came a little later, was that in what was an extremely tight and competitive match, the ISLAND SELECT U13s & U15s won Match 1 by 9 points, and sit top of the 8 team YDL North division league !!!

The U17s took 3rd place which was also a great result as well with many not able to be there due to exam commitments.

So a great start to the ISLAND SELECT 2019 journey, with a place at the Scottish finals again very much the target.

Massive thanks to our vest sponsors, BUILDBASE. It was fantastic seeing all the athletes competing in their new vests with all the club colours represented! A big thanks also to the TRANSOCEAN TRAVEL FUND & THE LEWIS & HARRIS SPORTS COUNCIL for their help with trip costs. Their collective support is invaluable to help give our young sporting talent these great development opportunities. 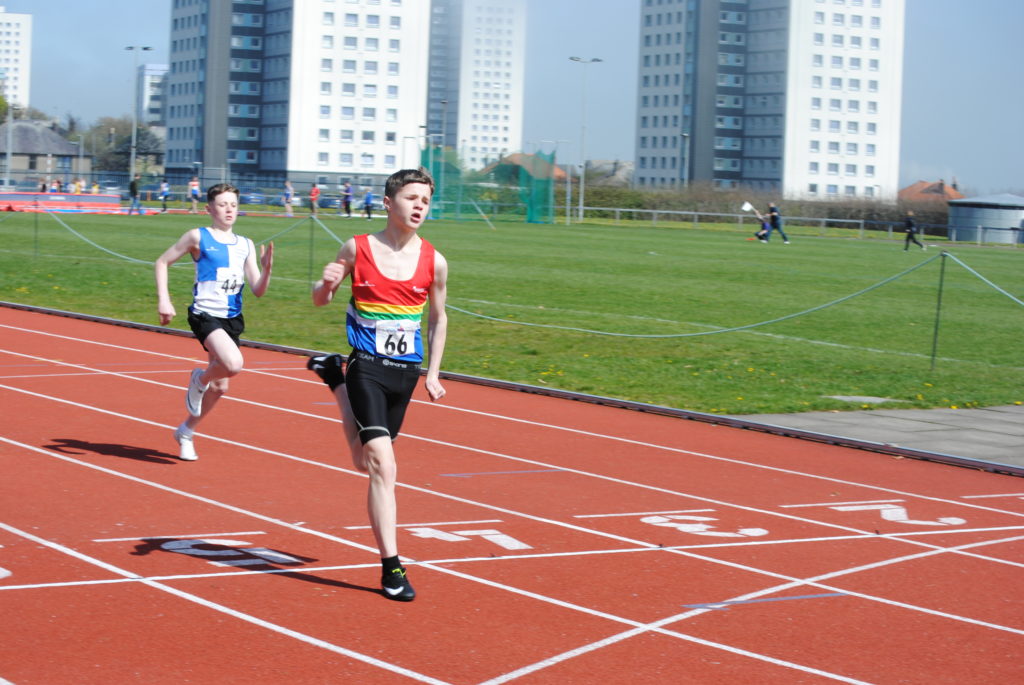